May 30, 2018|Lynn Plaisance
Gary Robison, PGA will have his name added to the Senior Ohio Open rock at Firestone Country Club for the fourth time. He shot a 69-70 for a 1 under par 139 and won on the 2nd playoff hole. He last won the championship in 2015. First round leader Steve Parker, PGA made an eagle on 17 which resulted in a 3 stroke swing after Gary missed a six foot par putt which ultimately forced a playoff after both pared the finishing hole. Three tied for Low amateur honors at 145 (+5) which included 2016 Champion, Nick Lambos from Canton, OH, Dan DeVore from Cincinnati, OH and Roger Tolley, from Willard, OH.

Don Padgett II, PGA, former Director of Golf and General Manager at Firestone Country Club, won the Super Senior Division with a two day total of 71-68=139 (-2). Second place finisher and low amateur was Jeff Sparks from Cincinnati, OH with a score of 74-69=143 (-1). 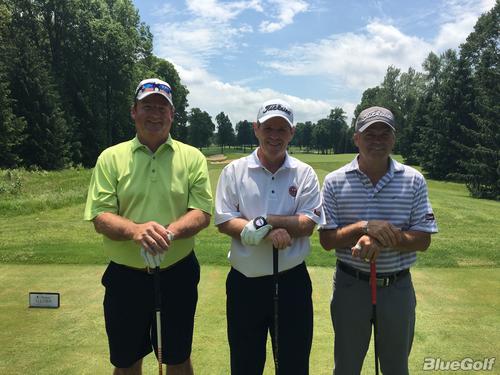 Padgett along with current sponsor Tom LaRose (House of LaRose) brought the Senior Ohio Open to Firestone Country Club in 1996 while Padgett was the Director of Golf. He would later go on to be Director of Golf and President of Pinehurst. This was the 21st year that Firestone has hosted the prestigious senior state championship with the first event being held in 1996 with only a two year break (2001 & 2002) due to club renovations. This year’s championship was contested on May 30 & 31 on Firestone’s famed West Course.

The Northern Ohio Section of the Professional Golfers’ Association (PGA) exists to promote the enjoyment and involvement in the game of golf within the Section, and to contribute to its growth by providing services to professionals and the golf industry. The Northern Ohio PGA has more than 390 members and 75 apprentices in Northern Ohio. Visit www.thenorthernohiopga.com for additional information.

Crowded Leaderboard After First Round of NOPGA Tour Championship